Home » An Ending for Benjamin Walter 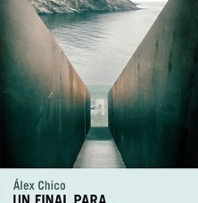 In September 1940, a group of refugees left France through a clandestine passage in the Pyrenees. They hoped to cross Spain and follow their route to America, fleeing the barbarism that had taken over Europe. Their first stop is a small border town, Portbou, a bay lost between hills and paths, and a key place in the long march of exile. However, not everyone manages to continue on their way. One of them, a stateless man without nationality who the Spanish authorities renamed Benjamin Walter, was found dead a few hours later.

Seventy-four years later, the narrator of this story decides to travel to Portbou in order to find out what happened during Walter Benjamin’s last hours. Nevertheless, his initial investigation is branching out and giving way to new questions that affect this self-absorbed border town and the events that have occurred there from the end of the 19th century to the present day.

Halfway between the essay, the novel, the diary or the travel chronicle, An Ending for Benjamin Walter proposes a two-way reading from Portbou to Walter Benjamin and vice versa, as well as a melancholy reflection on the past that questions the present and on the difficult art of surviving.