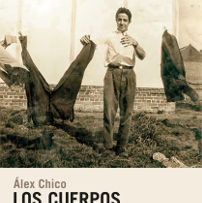 Álex Chico is one of the 10 authors chosen in the second edition of Spanish Agency for International Development Cooperation’s “10 out of 30” project, 2020.
A sharp reflection on language, memory and emigration

During the 1960s, many Spanish workers left their place of origin and sought employment in Europe. Some time later, with the oil crisis and the rise of xenophobic movements, some took the road back. However, not everyone returned to their hometown, but to an intermediate area that had already served as a welcoming city years before: Barcelona. This novel relates one of those journeys, the one undertaken by Manuel Chico Palma from a village in Granada to a small town on the Franco-Belgian border. The narration branches out and becomes a choral story in which the conflicts posed by any process of displacement and the split personality of the person who carries them out are tackled. Characters fractured between nostalgia and amnesia, the past and the present or reality and fiction and who, in their own way, fulfilled Emmanuel Carrère’s phrase: “Promises to tell the truth and lies as best as possible”.
Split bodies is also a sharp reflection on language, memory and writing as tools to reconstruct an absent being, someone we did not know and yet who is part of our lives. A hybrid narrative that moves through different genres and that converts this border literary space into a reflection of those places of blending that little by little the men and women who inhabit them are constructing.

Press and blurbs : https://www.candaya.com/libro/los-cuerpos-partidos/
“This book is, above all, poetry. A precious sum of poetic prose. What gentleness in his writing, what gentleness in the way Alex Chico narrates. And moreover, with an impressive narrative maturity, as if it was written by someone who has visited several worlds and lived several lives” Rubén Darío Fernández, Excodra Magazine, December 22, 2019