Home » The Order of the Aleph

The Order of the Aleph 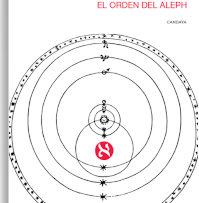 An essay written by a bookish detective: an investigation into the origins and meanings of one of the most important short stories in world literature, The Aleph by Jorge Luis Borges.

The Order of the Aleph is an exploration of Jorge Luis Borges’s aesthetics based on his most famous short story, in a reading that weaves together ﬁlology, cartography, ﬁlosophy and history to reveal the story’s original sources and its ﬁnal intuitions, particularly those related to the historical context in which it was written, in 1945, as a response – melancholic but hopeful – to the horrors of its time: The Holocaust, the nuclear bombings of Hiroshima and Nagasaki, the World War coming to an end.
In this compendium of stories, references, discoveries, games of mirrors and mysteries, Gustavo Faverón puts himself in the shoes of one of the most interesting characters in Borges’ universe, Erik Lönnrot, the protagonist of “Death and the Compass”, to decipher, like a bookish detective, what Borges hides in the metaphorical and symbolic universe of “The Aleph”. In this way, we will explore, from the work of the Argentinian author, clues hidden in The Thousand and One Nights, The Divine Comedy, the Bible, Anatomy of Melancholy or Hamlet; or in the work of authors and historical figures such as Tycho Brahe, Thomas Browne, Benedetto Croce, Thomas De Quincey, Edgar Allan Poe or Franz Kafka.
The Order of the Aleph is a labyrinth, and at the same time it is a map that helps us to walk through the labyrinths of Jorge Luis Borges’ literature, and it is also a generous exercise in shared reading, a look at the connections that emerge when we look at “that secret and conjectural object… the inconceivable universe”.