Home » My Season at the Hell 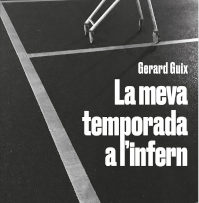 A history that is born since the purest simplicity to end transporting us at a spiral of facts and emotions that will shake us and will teach us the most obscure part of our society. From 14 years old

13 years ago, in a mountain village where nothing ever happens, a teenager died during a raid of hunting. In the same village, today, my mother has disappeared at odd circumstances. The two facts, at his way, connect and relate, disturbing this apparently idyllic place: the death of the teenager converted to the black legend of the people, that scares the boys and upsets the adults. The mother’s disappearance to a palpable threat that arouses the most obscure sentiments of the locals.
My name Ricard. Ricky for the friends. Rick for the mum.
This is the story of the losers, formed by persons like you that one day find themselves in an unexpected, unwanted and alarming situation, that happens the most confused week, the sorriest days, the most obscure hours of my life. At very first hour of the morning of a Sunday of February, a couple of mushroom pickers found the mother’s car at the parking of the Hypermarket. It had the door of the open driver wide open but, not inside nor at the surroundings, there was any trail of her.
Just there began my descent into hell