Home » TRILOGY The Prodigy, The Wit, The Talent 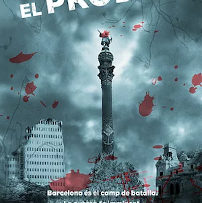 Book eligible for TRANSLATION GRANTS from the RAMÓN LLULL INSTITUTE in Barcelona.

THE PRODIGY His name is Axel because their parents liked Guns’n’Roses and this was the name of the leader. His name is Axel, but he could have called Odin, the guy from Sweden he has never seen but that each year sends him a birthday gift. Odin is a mysterious and improbable character, and interestingly Axel meet him just when his teenage body begins to undergo some distressing changes that fill him with doubts. Axel does not know that a very tough fight awaits him and that within a few years the books will talk about him, the prodigy, because he is about to change the course of history.
THE WIT The sun has started to peek coyly. The whole city is orange colored and is beautiful despite the smoke still around after the last night attack. Since I’m not a vampire, when the rays of the sun will impact on my skin nothing will happen to me. Neither will I realize it. They aren’t powerful enough to undo all the ice in me. I’m not a vampire, unfortunately. I’m much worse .
All stories have two versions. In The Prodigy we eared the Axel’s one, now is the turn of Odin
THE TALENT It’s been too many hours since all the inhabitants of Earth have lost consciousness in this cold sleep, and it seems that the more time passes, the less likely that anyone will survive. Neither human nor animal. Only plants seem to be immune to this deadly sleep. There is no hope in any corner of the globe. All beings seem asleep in this strange coma that has gripped the entire planet. There is only life, and a little hope, at the epicenter of the seventh mass extinction. In Barcelona, the city where is right now fighting the battle of Ragnarök»