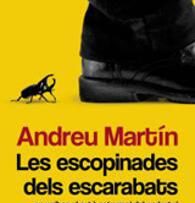 The murder of two partners in a financial consulting firm triggers a major police operation involving Germán Rojo, a powerful man who believes he is untouchable and far above the other mortals, those annoying cockroaches he can crush whenever he wants. However, it has a weakness. Melba, a young woman, who will show her how cockroaches struggle to death to survive, and can take revenge. Corruption, scandals, money laundering, espionage, violence, sex… are the ingredients of this noir novel in which Andreu Martín paints a particularly critical portrait of the times we live in, as Andrea Camilleri in Italy and Petros Markaris in Greece doe