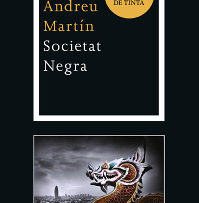 “Soong, Dona, Home i Nen, Señora, Caballero y Niño, Lady, Gentleman and Child Fashions, Wholesale Only”. This is how it appears on the business poster of some Chinese businessmen that camouflages the secret bank that is robbed before the macabre discovery. After the discovery of the head in a street in Barcelona, the rest of the body, which was hidden, was dragged by a car when the driver started it up. Later on we learn of other brutal murders committed that same day and they are all related. From the beginning all the rumours that are circulating point to the Chinese. As soon as he hears them, Chief Inspector Diego Cañas of the National Police Force knows that it is true. The Mossos d’Esquadra believe that it is a Latin gang.
Chinese Mafias, Triads, Hei She Hui, Black Society. Latin bands, the maras, the Salvatrucha. These are the axes of the novel, about which the author has developed an extensive documentation task that makes it, in some moments, remind us of a journalistic chronicle.
Andreu Martín masterfully combines violence, corruption, sex, crime, politics… ingredients that make him a sure bet for lovers of good crime novels.