Home » The Machine of The Future 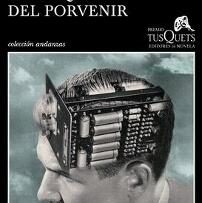 “Perhaps it is the flow of the narrative, and not the meaning of the story, that shows us that we are alive.”

A prodigious story about a secret project: the machine that anticipates the future.

When his mother dies, Óscar travels to Berlin to take charge of her belongings. He hasn’t had word from her in years because, in fact, she was living with another woman and had turned her back on her son. And neither can he inform his father, a stranger he has seen on only a few occasions, the author of successful books on the search for happiness. Dismayed, lacking roots, Óscar hopes to reconstruct the story of his family in 1930s New York, 1970s Cadaqués, Mexico and Buenos Aires, only to find that he may belong to the ranks of the dissatisfied and the visionary, of the obstinate seekers of a transcendental truth. A prodigious story told in three time periods with three characters from the same family, attracted by the same project: the construction of an artefact that anticipates the future.