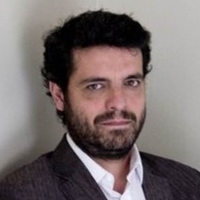 Túsquets Price 2014 for The machine of the Future

(Barcelona, 1970)
Juan Trejo graduated in Hispanic Philology from the University of Barcelona, he was a member of the editorial team of the magazine Lateral and co-director of the literary magazine Quimera from 2006 to 2009. At present he is a literary translator from English and contributes to the cultural supplement of La Vanguardia and The Altaír’s magazine. His first novel, The End of the Cold War was celebrated as “a superb exercise in the recovery of sentiment written with new tools” (Robert Juan-Cantavella) and translated in France by Actes Sud. In 2014 he won the Túsquets price with the novel The machine of the Future , and has since published in this publishing house.