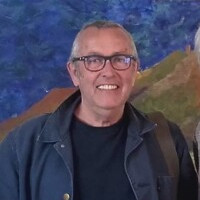 His last three black novels were published by Au-delà du raisonnable, now disapeared. Peace more than Truth (2013) Antonia (2015) are available to be republished in french. Xangô (2018) has been republished by Horsain.

(Collioure, 1953). In addition to writing since his youth, he had many trades as a navigator in the commercial navy and is now a farmer of olive trees. He wrote several books of detective novels (Paul FEDER series, recently republished by Horsain. The last one, Tsunamis, is the 6th of the series). He writes as well Fantasy novels (Xavi el valent series, a medieval catalan heroe, with three other authors).