Home » Playlove. Where Streets Have No Name 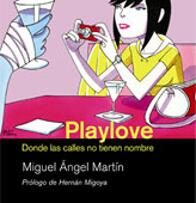 Martín in Playlove puts his finger on the wound that hurts: couple relationships. His gaze is acidic and humorous as always.

The worst day of Ari’s life was about to turn into the best day of her life. Abandoned by her fiancé and kicked out of her job, she meets Dani, the ideal man. But as Hernán Migoya warns us in his preface, “male infidelity is a curse”. In the cold and aseptic world in which Martín’s characters move, the plot of the story is constructed like a mechanic, by means of ellipses and symbols that offer the reader a multitude of readings. In this structure influenced by cinema, we play with social taboos, immersed in a futuristic atmosphere, even if this future is the one that should arrive in 5 minutes. In soundtrack, pop and electronic music. And what looks like a pseudo-romantic story is heading towards a psychological thriller.