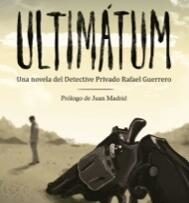 Sicily, Madrid and Syria at war are the places where Rafael Guerrero’s new investigations are taking place in 2014. Places that will lead the author and character to an ultimatum. Prostitutes, mobsters, spies and private detectives form the crowd of characters involved in the same story. A story that is rooted in the reality of a detective for real, both lived and written, reinvented in writing. Rafael Guerrero catches you in his ironic, sarcastic and not always glamorous canvas to show you the most sordid and tragic facets of our world.