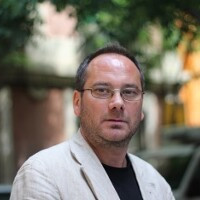 “Detective Rafa Guerrero, the one in the novel, perhaps also my real friend Rafael Guerrero, turns out to be a man who no longer believes in anything and anyone. Although not enough to leave that world of adventure.” Juan Madrid

(Madrid, 1969)
Private investigator, Director of the “Grupo Agency World Inv. agency”, criminologist at the Complutense University of Madrid, Director of Security for the Rey Juan Carlos University of Madrid and member of the United States Private Investigators Association. Author of four detective novels by an eponymous character, the detective Rafael Guerrero, Un guerrero entre halcones. Diario de un detective privado (A Warrior in the Midst of Falcons. Diary of a Private Investigator, 2011), Muero y vuelvo (I Die and Return, 2013), Ultimátum (2015) and the last one Yo detective. Passionate about black movies and novels, he regularly participates in the major festivals of the genre in Spain. He has a new manuscript to be published for the saga Detective Guerrero.