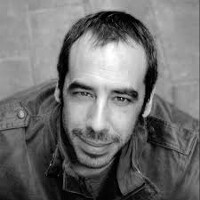 Carlos Bassas works as a fortune teller, a task that he balances with teaching and writing scripts. In 2007 he won the Plácido award for Best Black Genre Screenplay at the IX Manresa International Black Film Festival. He’s writen several novels for adults and youth public, published a book of haiku (Mujyokan, Quaterni). In 2019, Justo won one of the most important Prize in black literature, the Dashiell Hammett prize of Girón. His lst novel, Soledad, is just published by Alrevés.