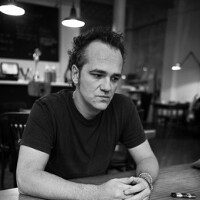 “Proust Fiction has fun with other styles and genres, with no more respect, guided by the refreshing taste of unexpected beauty and scattered meaning”. Nils C. Ahl, Le Monde des Livres, 06/10/2011.

(Almassora, Valencia, 1976. Lives in Barcelona)
Considered one of the most talented writers of his generation, Robert Juan-Cantavella is also a French translator (notably of Mathias Enard) and a professor at the Ateneu Writing School in Barcelona. He was a contributor to the Barcelona literary magazine Lateral in the 1990s (alongside Mathias Enard, Juan Gabriel Vásquez, Juan Trejo, Jordi Carrión, etc.) and Quimera which he managed several years. He is the author of several books, including Otro (2001) his first novel, El Dorado (Literatura Mondadori, 2008), the collection of short stories Proust Fiction (2005, translated by Mathias Enard), El corazón de Julia (2011, with Óscar Gual), the collection of poems Los sonetos (2011), Asesino cósmico (Literatura Mondadori, 2011). His last book published before Nadia is an essay, The Reality: Chronicles of Scoundrels (Malpaso, 2017).

And The Sky Was a Beast