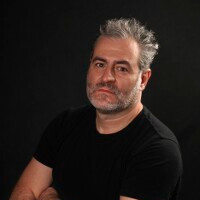 Fernando Clemot works on memory as the work of a lifetime. He scrutinizes all its functions in order to give meaning. His narration is as personal and chiselled in his novels as it is in his short stories.

Setenil Prize for the best book of short stories 2009

Fernando Clemot has published the books of short stories Unforgettable Safaris (2012) and Chiado tobacco stores (2009), which was a finalist for the National Prize for Narrative and the Setenil Prize for the best book of short stories published that year. He is the author of the novels Polaris (2015), The Book of Miracles (2011) and The Gulf of Poets (2009). He has also published a creative narrative essay entitled ‘How to Create and Uncreate a Story’ (2014) and his work has been included in numerous anthologies. His last book of short stories, The Language of the Drowned, was published in November 2016 (Menoscuarto). He currently balances his time between working as a teacher at the “Escuela de escritura de l’Ateneu de Barcelona” and “Escuela de escritura de Madrid”, with his role as director of the literary magazine Quimera. Two new novels, will be published soon, FIUME and The Savages.

The Gulf of Poets

The language of the Drowned