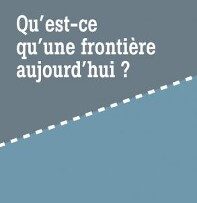 It is a book about borders written in the foreboding of what is now commonly known as the “migrant crisis”. Based on a longstanding partnership with scientific writings on the border issue (multidisciplinary texts written in different languages), it escapes the constraints of academia to propose a writing open to all. What is a frontier today? poses a thesis, that contemporary international boundaries are not simply lines cutting the world into states placed side by side on the planets: as filters of globalization they have become constituent elements of the lives of individuals and institutions alike, and it is becoming urgent for everyone to become aware of their growing weight in our political future.

Today, the importance of borders in people’s lives is more than theoretical. Borders unite and divide; they have become mobile and individualized, letting some move around freely and restricting access to others. Hence, whether they are opening or closing, borders have become an object of public policy as well as an essential resource for private interests; they are both a governing tool and an advantageous one for the market economy. They represent a point of political, social, economic exacerbation, a laboratory of our times. For the moment, international borders remain the basis of citizenship, on which democracy is built… But the manner in which they oscillate reveals the uncertain future of our political systems. To understand what a border constitutes today means raising fundamental questions in order to visualize our future societies, as well as redefining our relation to the world.

English sample with Introduction and extract of the third part