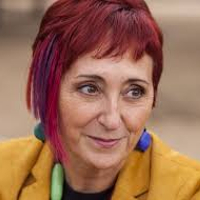 Her last novel of literary fiction, before The ECho Of Skin, is El color del silencio (The Color Of Silent) published by Roca (spanish and catalan) has been translated in Germany (Piper), Netherlands (Querido), Poland (Wydawnictwo Literackie).

Elia Barceló is the author of internationally successful novels like The Goldsmith’s Secret (translated into eleven languages, including french by Flammarion), The Hippogriff’s Flight, Terrible Disguises and The Long Shadows. The combination of mystery and genre elements with realistic plots and a superb character building have become her trademark. Being one of the most versatile writers working now in Spain, she has been called “the Lady of the Thousand Worlds”. Unsurprisingly, she wrote her PhD on the archetypes of terror in Julio Cortázar’s short stories (The Disturbing Familiarity). She is considered one of the three most important female SciFi writers in the Spanish language. Her latest contribution to the genre has been the Trilogy Anima Mundi (Celsius Award 2014). She also is the author of more than fifty crime and short stories that have been published all over the world, in eighteen languages. Her estimated worldwide readership is more than a million. Since 1997, she has been publishing books for young adults, such as The Case of the Cruel Artist (Edebé Award 1997), The Warehouse of the Terrible Words, Cordeluna (Edebé Award 2007) – all of them longsellers – and, most recently, My Life for yours (2015).

The Echo Of Skin